The UK is rarely the first country we think of when it comes to food but it has given to the world quite a few delicious dishes!

Manchester is no different! If you are foodie, you will love this northern city.

Firstly, it’s home to fantastic restaurants and bars! No matter what kind of food you want, you will find it!

Secondly, Manchester’s local delicacies are wonderful and well worth giving them a try! You may be surprised to discover that some of these Manchester foods managed to make their way into everyone’s plates in the United-Kingdom!

So, are you ready to discover the most delicious dishes in Manchester? 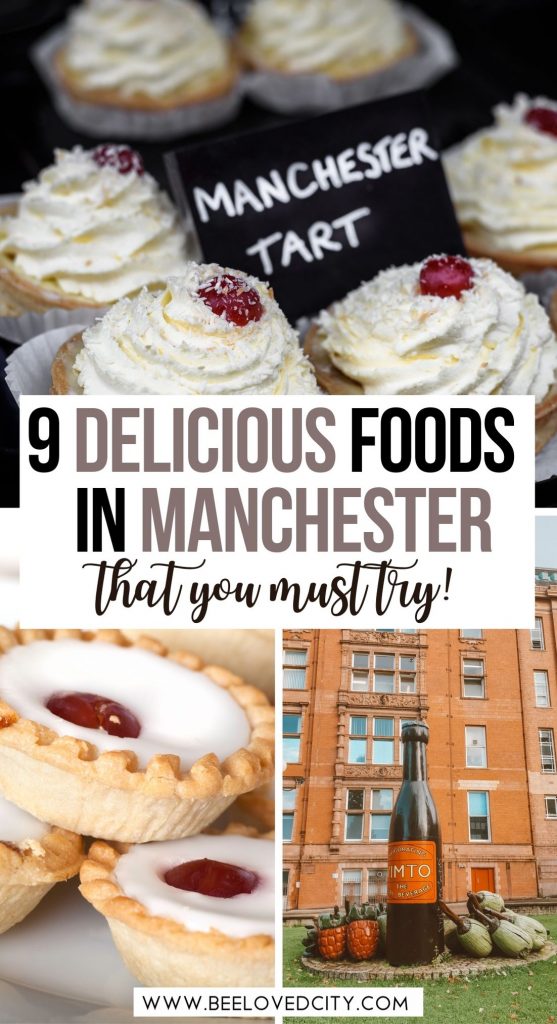 The most delicious Manchester foods

In this section, you will discover typical foods from Manchester and Lancashire.

The black pudding is an essential piece of any full English breakfast. It is a blood sausage mainly made with pork blood.

Although several places (including Scotland and the British Isles) are claiming to be the birthplace, it is believed to have been imported by the French to Bury (North Manchester) where butchers started manufacturing and selling it.

The word “pudding” itself can be a bit confusing for someone who is not from the UK as people usually assumed a pudding is a cake rather than a savoury dish. The name comes from the original French word “boudin”. The French have been eating boudin for centuries and when they came to the UK, they brought with them some delicacies. This is why a lot of food words in British English comes from the French. A few noticeable examples are courgettes and aubergines.

Historians believe that the first black pudding in Manchester was made and sold at Casewell’s on Union Street in Bury in 1810.

You can find Black Pudding in any supermarket in the UK but for the full experience, make sure to buy some at a butcher shop in Bury.

The Lancashire cheese is a crumbly cheese made with cow’s milk.

It is one of Britain’s oldest cheeses and was initially made to use up the surplus of milk in farms. This is not unusual as that’s the reason why most farms started making cheese in the first place (not just in Britain).

The crumbly Lancashire cheese is a more recent variant and was created for the purpose of mass production. It is the cheapest of the three but is not as traditional. For an authentic experience, make sure to buy the young creamy or the mature tasty.

As the name may suggest, the young creamy is a young cheese which means it’s not as strong or tasty. If you like a good old tasty cheese, the mature tasty Lancashire will be perfect for you.

Traditionally, the Lancashire cheese is eaten with Eccles cakes or Chorley cakes (two other local delicacies).

If you do want to eat more local cheese, you can also try the Cheshire cheese. It’s also a rather ancient cheese and was Queen Victoria’s favourite! It is not from Manchester exactly but comes from the neighbouring county of Cheshire.

The Meat and potato pie is a classic of the Northern cuisine. You can find it everywhere in the UK but is a typical dish from the counties of Lancashire, Yorkshire, Cheshire, Cumbria and Staffordshire. It is made with stewed beef, potatoes, onions and gravy. Simple and efficient!

You can find it in most pubs in Manchester city centre but also in some bakeries. They sell mini versions of the meat and potato pie to take away.

If you are in a pub, don’t forget to order a pint of ale or cider to go with it!

Traditionally made with lamb, onions, stock and potatoes, the Lancashire Hotpot has become a pub classic all around the UK now but it finds its origin in Manchester.

Not only is the Lancashire hotpot a delicious Mancunian dish but it also has a very interesting history.

As you may know, Manchester became an important city during the industrial revolution. At this point in time, warehouses started popping up all over the place and the city was bustling with workers going to the cotton warehouses. The bee became the symbol of the city and the expression “busy bee” and “working bee” became a thing.

Just before the industrial revolution, people would spin the thread at home. Everything was handmade. In order to make as much thread as possible, the entire family would do a sort of relay. This included children and old people as well.

Because of that, they didn’t have time to cook and stay in front of the stove so they started making a stew. That way, they would put mutton in a hot pot on the fire and it would slow cook while they were spinning the thread. This is the traditional Lancashire hotpot!

Nowadays, it’s made in a more modern way and rarely includes mutton. Lamb is more common.

When it comes to famous Manchester food, this one is on top of the list!

The Manchester tart is a typical Mancunian pudding made with jam, yellow custard, a pinch of coconut and a cherry on top. A classic!

Not only is beautiful but it also is delicious! The Manchester Tart used to be a favourite on school’s menus until the 80s. You would see it all the time. The recipe itself is thought to be a modern variation of the Victorian Manchester pudding.

Eccles cakes are small round pies made from pastry with butter and filled with currants or sultanas.

They’re named after the town of Eccles, now part of the city of Salford, in Manchester.

The pastry is quite flaky which is why they are nicknamed “squashed fly cake”. They are usually served with Lancashire cheese.

Eccles Cakes are a pretty old recipe now. The first ones were sold by James Birch in his shop, at the corner of Vicarage Road and St Mary’s Road, now Church Street, in the town centre, in 1793. Since then, they become one of the most popular cakes in Manchester and the rest of the UK.

Unfortunately, the appellation is not protected which means that anyone manufacturing Eccles cakes can name them as such, regardless of where they are located. If you want to make sure to try a traditional Eccles cake, you can either go to a bakery in Eccles itself or check on the box where they were manufactured. Ideally, head to a local shop rather than a supermarket for this one.

A Chorley cake is a flat pastry cake filled with fruit. It’s very similar to the Eccles cakes so if you like one, you will usually enjoy the other.

That having been said, Chorley cakes are nowhere as sweet as the Eccles cakes. They are made of unsweetened pastry and use currants. This gives them a bit more of a bitter twist which is why they go very well with Lancashire Cheese. They are also cheaper and easier to make.

Traditionally, people would let them cool a bit after taking them out of the oven and eat them warm. A bit like with a mince pie.

They originate from the town of Chorley, in Lancashire. Chorley is located 40 minutes away from Manchester so although it is not an actual Mancunian food, it is widely consumed in the city and the county of Lancashire in general.

Once again, this is not an example of food that was created in Manchester however, it is very popular in the city! The Bakewell tart comes from the small town of Bakewell in the Peak District. You can easily go there on a day trip from Manchester.

Alternatively, you will find it in most bakeries in Manchester city centre as well as in supermarkets.

Of all the Manchester delicacies mentioned in this article, the Bakewell Tart definitely is the prettiest of them all!

It is a tart made with a shortcrust pastry and layers of jam, frangipane and flaked almonds. The traditional one has the almond flakes on top but you may also find the cherry Bakewell cake. The recipe is similar but it looks a bit prettier with a white and red topping!

Looking for drinks to accompany your food? No probs! Here are the best drinks in Manchester! 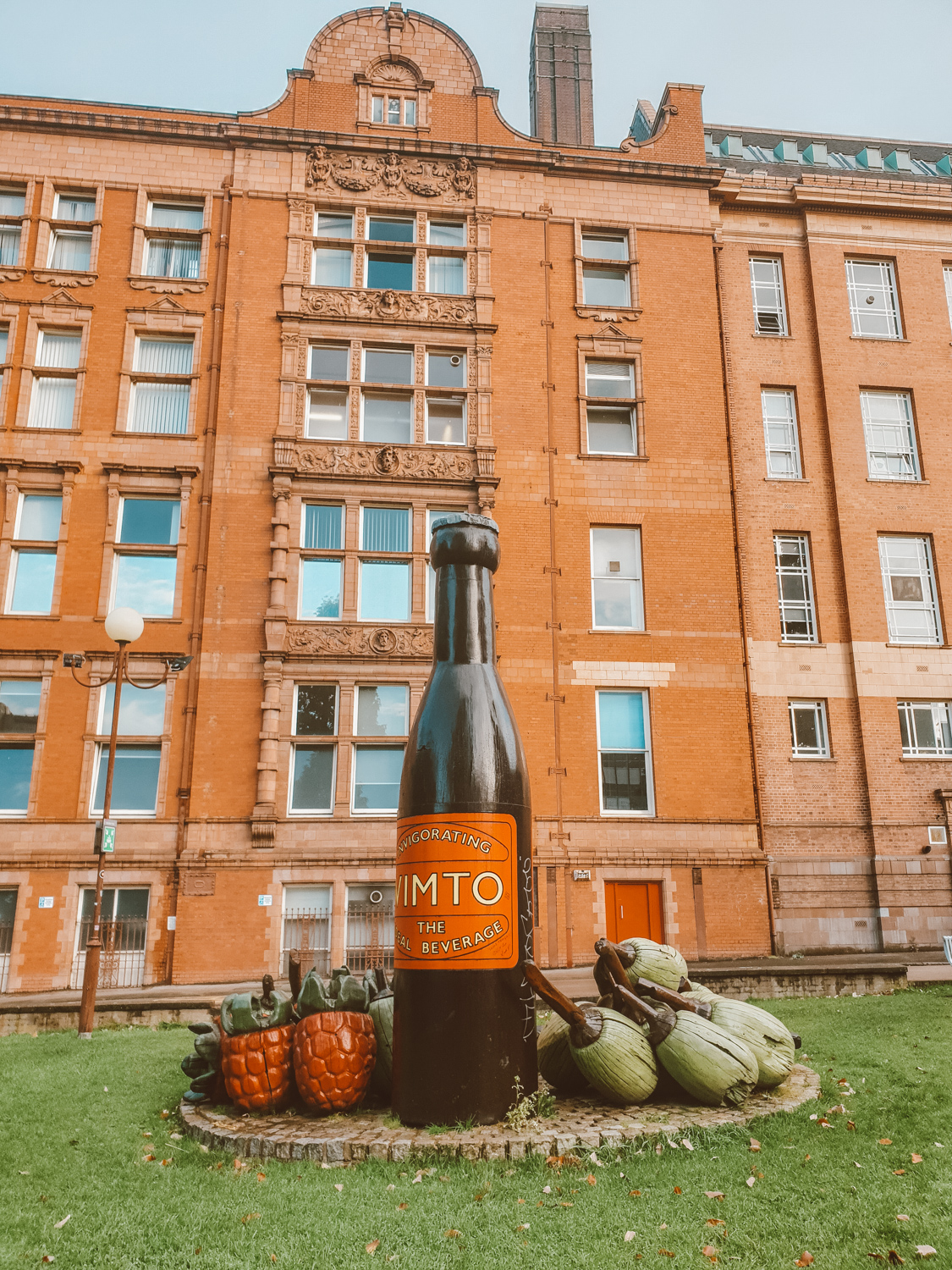 Vimto is a Mancunian soft drink that was invented by Noel Nichols in 1908. At the time, a lot of people in Britain were dying because they were drinking too much gin. Bear in mind that gin, at the time, wasn’t done the way it is now. Most people would do that at home using distillation processes that are nowhere near the highest standards of safety.

Nichols believed he could solve the alcohol addiction issue by creating a soft drink better than alcohol. Not sure it solved that problem but it became an important part of the Manchester food and drink scene.

Ironically enough, it is mainly used in cocktails now! So much for being alcohol-free, right?

As you roam around the streets of Manchester at night and experience the nightlife, you will find loads of bars serving Vimto-based cocktails.

This drink is also popular among children and adults drinking soft drinks. Mancunians will usually get a can of Vimto instead of coke. You can think of it as the Manchester version of Iron Bru (Scottish soft drink).

To celebrate this typical Manchester drink, the council added a sculpture in the city. It’s one of Manchester’s best-kept secrets as well as an excellent photo spot! You can find it in front of the University of Manchester in Vimto Park.

Manchester is home to many distilleries and Manchester Gin became one of the most famous drinks in the UK. You can easily recognise it in supermarkets as it features the famous Manchester bee.

Nowadays, the Spirit of Manchester Gin Distillery produces over a million bottles a year.

As a traveller, you can also visit the distillery. They give tours that include gin tasting. It’s a very cool thing to do!

The distillery is located in Manchester City Centre, on Watson St. The building is very unique as it’s one of the arches under an industrial bridge. If you are looking for an authentic Manchester experience it’s the perfect thing for you! Especially in winter or when it rains as you will be inside!

The Ultimate Manchester Quiz: 32 Questions and Answers about Manchester