If you love murals and street art, you are in for a treat! Street Art in Manchester is big and there is a lot to discover!

Located in the north of England, Manchester was mainly built during the industrial revolution. This industrial background is still all around in Manchester. The old cotton warehouses, red-brick houses … The city kept this very unique vibe.

As you may know, street art tends to emerge in modest neighbourhoods. Manchester is no exception.

The working class in Manchester has always been important, which is why the symbol of the city is the working bee. Nowadays, street art in Manchester is all around but there are a couple of districts with a strong industrial background that are home to most of the murals.

In this article, you will discover the best of Manchester’s street art! 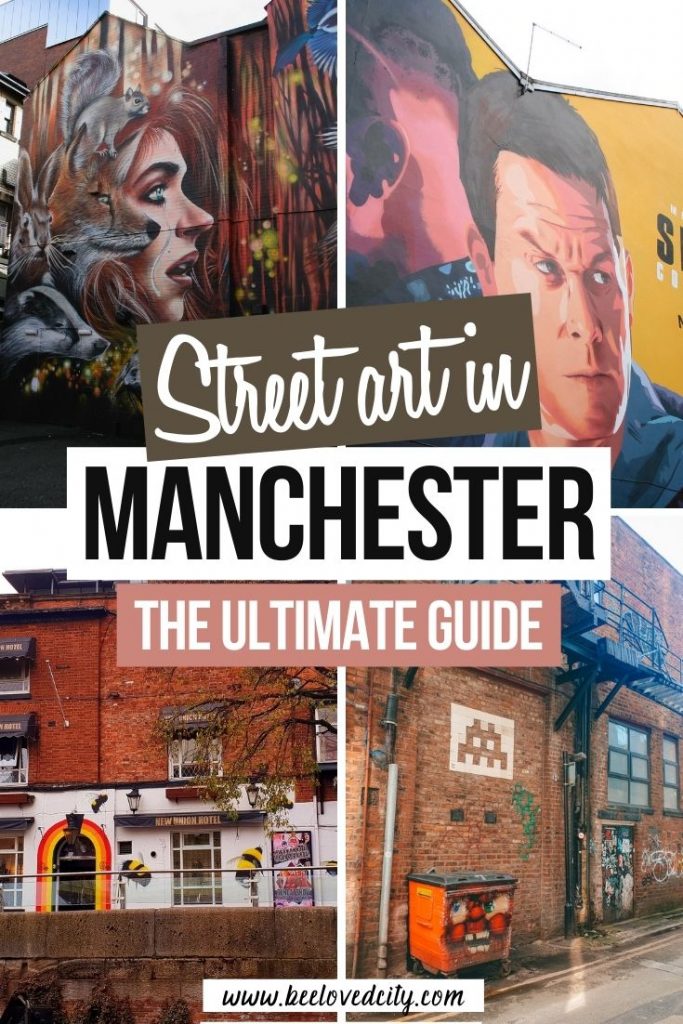 Where to find street art in Manchester?

As the name may suggest, the Northern Quarter is located in the northern part of Manchester city centre. It used to be one of the most industrial districts in the city. You will notice this industrial vibe instantly. It’s often used as a filming location instead of New York. In season 5 of the Crown, for example, Princess Diana visits New York. These scenes were actually filmed in Manchester Northern Quarter.

Street art in Northern Quarter is everywhere so the best thing to do is just have a wander and let yourself get lost in NQ! It’s not that big so don’t worry you will never be far from something you know. The main street in the Northern Quarter is Thomas Street. You will be able to see a few things there but more importantly, it will give you access to all these tiny streets full of murals!

As previously mentioned, the working bee is the symbol of Manchester. You will find it all over the city. On bins, signs, walls… But you will find even more of them in Northern Quarter as they are on almost every mural!
Mancunians are very proud of their city and they love to show off their bee, especially since the terrorist attack at Manchester Arena.

All of that having been said, there are few spots in Northern Quarter that you must check out if you want to discover street art in Manchester. 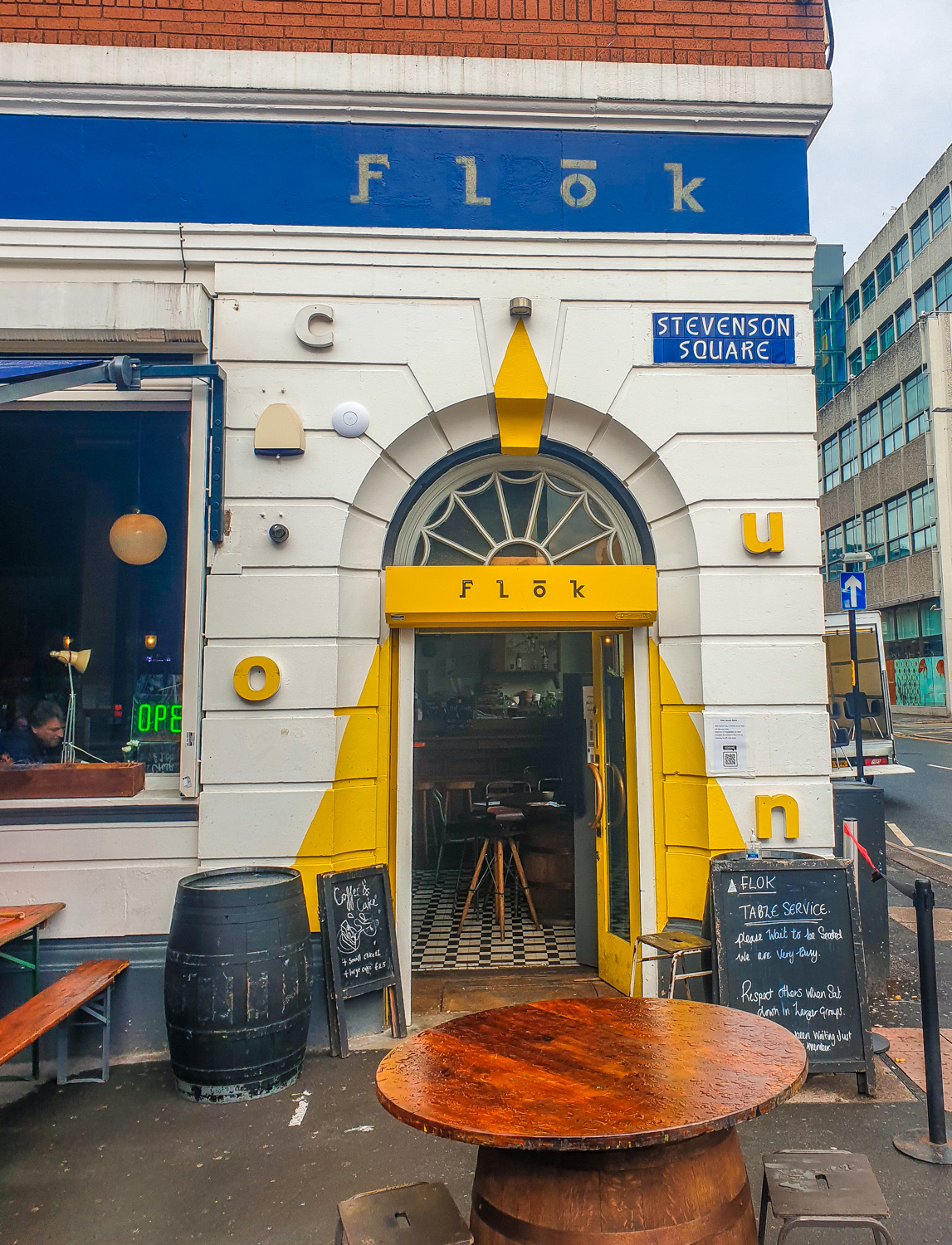 This square is full of bars and restaurants, making it one of the best place to experience the nightlife but if you are after a bit of Manchester’s street art, the central spot of the square is what will trigger your interest.

Right in the centre, you will find a block of disused public toilets. This one is permanently used by street artists. It’s one of the most famous as the murals that show up on that spot are always related to things happening in the world.

We had a portrait of David Bowie when he died, Arya Stark when she killed the night king… Plenty of them! And they are always awesome!

Please note that if you are coming from Piccadilly Gardens, the mural will be facing the other way. Make sure you walk around to see it. There is always one so you can’t be disappointed.

When you walk up Thomas Street (towards Shudehill Station), you will find High Street. Turn left towards the fish market and look at the wall in the corner. This place is home to some of the biggest murals in Manchester.

There are actually two walls. One is bigger than the other and is dedicated to inspirational murals. They change regularly so I can’t say what you will be able to see but they are generally very pretty like this one with birds 🙂

The other wall at the corner is generally for advertising murals. You won’t always find something there as it’s not always rented out but you may.
One of the most famous ad murals there was from EE (mobile phone plans provider) and was featuring Manchester City at the Eithad Stadium.

From Thomas Street, turn onto Salmon Street. At first sight, this is nothing more but a cul-de-sac. However, if you look on the lefthand side, you will find a bit of space with gravel and a massive wall. This is it!

This wall is a bit more secluded. It’s not on the main street which means that a lot of people don’t know of it. It’s definitely Manchester’s street art best-kept secret!

It is also mainly used for advertising. It’s one of the biggest in Manchester and you will get to see massive pieces there!
It’s very often rented by Netflix when they release new series.
If you want to take awesome photos, that will be the best place to do so as you won’t find many people coming here.

Again, you never know what will be on when you visit. If it’s painted in black, that means it’s being prepared for a new piece.

Ancoats is located just a bit further north than Northern Quarter. This old industrial district has been revitalised in recent years and is a very up and coming neighbourhood.

You will find plenty of cosy bars and restaurants there. Street art in Ancoats is not quite as present as in Northern Quarter yet but it’s spreading fast. Northern Quarter is kind of reaching the limit of what it can takes and Ancoats has loads of offers.

You can see the best murals in Ancoats on Gun Street, Sherratt Street and Blossom Street.

The Gay Village is one of the most lively neighbourhoods in the city and should definitely be on your Manchester bucket list!

You will find plenty of bars and clubs but also many pieces of art.

If you head to Sackville gardens, you will find the statue of Alan Turing and the LGBT Bee. 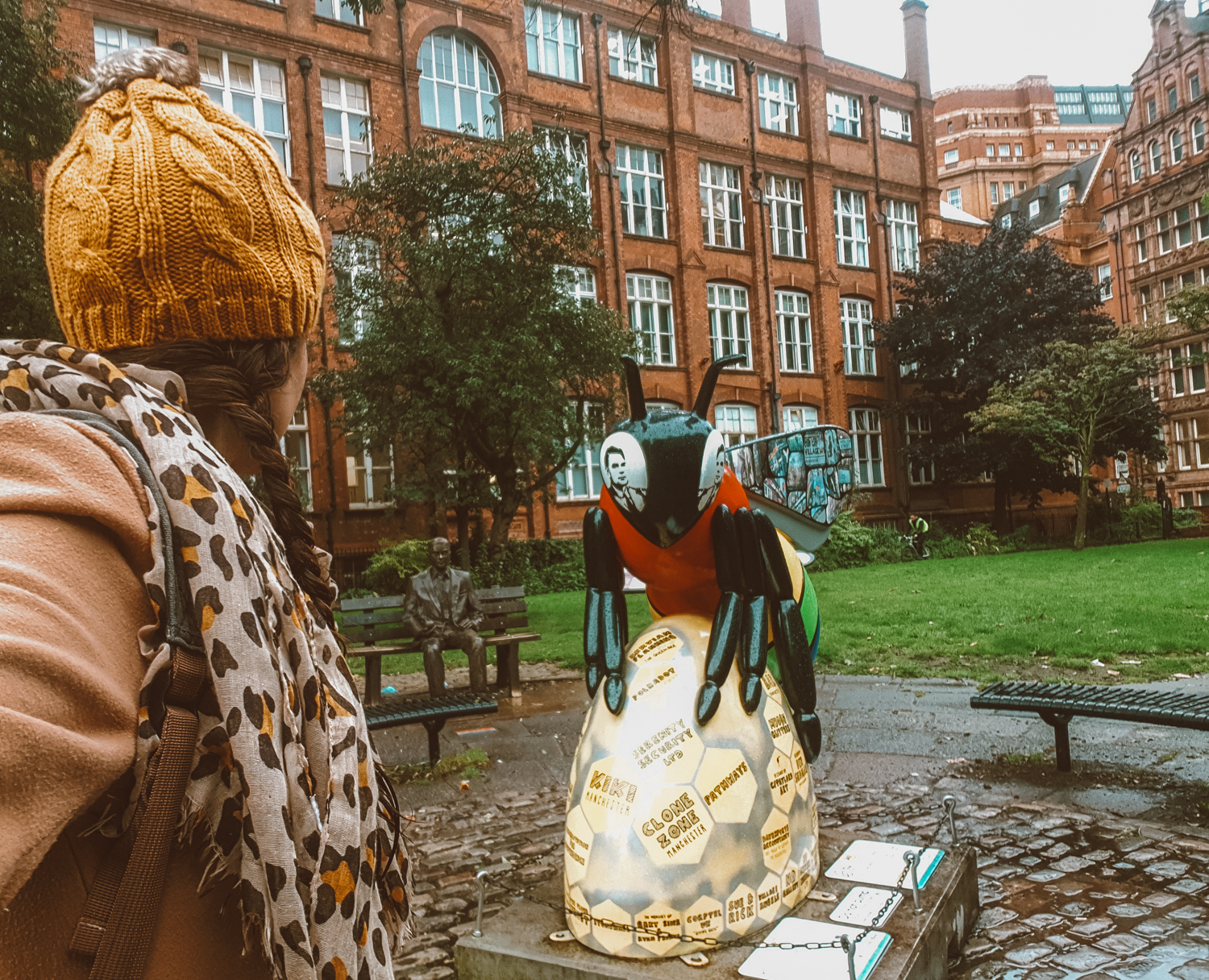 And when it comes to street art, Manchester Gay Village has loads to offer!

You can find murals on Canal Street, Richmond Street and Abingdon Street.

The most famous one is the mural of Ariana Grande on Canal Street.

Remember when I mentioned the terrorist attack at Manchester Arena? Well, that was during a concert of Ariana Grande. This horrible event traumatised the city and Ariana became somewhat a symbol since.

She was also traumatised by what happened (understandably). She even got the Manchester bee tattoo! It took her over 2 years to come back to Manchester but when she finally did, it was for Manchester Gay Pride! This is why her mural is in the Gay Village!

Hulme is also a neighbourhood that used to be very modest but is getting more and more popular. You can find a few big murals there as well. This includes Liam Gallagher and another few pieces.
They are located on:

Other areas with street art in Manchester

The areas previously mentioned are definitely the ones where you will find the biggest concentration of street art in Manchester but if you fancy seeing a tiny bit more, here are a few places that could be of interest:

When it comes to street art in Manchester, you will be spoiled for choice! So just grab your camera and go explore!

This Mancunian street artist is the most famous of them all. Why? Because his murals have grown to become the most emblematic in the city. Akse P19 has been based in Manchester since 1997 but is actually French!

He is known for painting portraits of pop culture icons. They are often displayed on Stevenson Square.

The most famous ones are:

The best place to find his work is Northern Quarter. It’s all around! You can even see some of his murals in local bars. If you go to the Pen and Pencil, make sure to sit at the back. You will notice a portrait on the wall. Well, that’s one of his!

That being said, NQ is not the only neighbourhood where he paints. Ancoats, Rusholme, Castlefield and Burnage are also good place to find Aske P19’s murals.

Although you can find his art all around the city, his master piece is, without a shadow of a doubt, the 22 bees mural.

Qubek was commissioned by Manchester Evening News to paint this iconic mural. The working bee is the symbol of Manchester. Visitors may walk past and think that it is just a “normal” mural but for Mancunians, it’s so much more than that. It represents their city! Their soul!

Qubek also painted one of the bees from Bee in the city Trail.

One day in Manchester

What to do in Manchester when it rains