There is no better way to understand what a city is like than hearing it from people that know it best. BeeLoved City has compiled a list of quotes from people that are from, have lived in or visited Manchester. From Noel Gallagher, lead singer of Oasis, to Anthony Wilson, owner of La Hacienda, take a look at the most famous quotes about Manchester and Mancunians.

But that’s not all! The city is also home to 2 fantastic football teams and there is a lot to stay about them too which is why you will also find quotes about Manchester United and Manchester City. 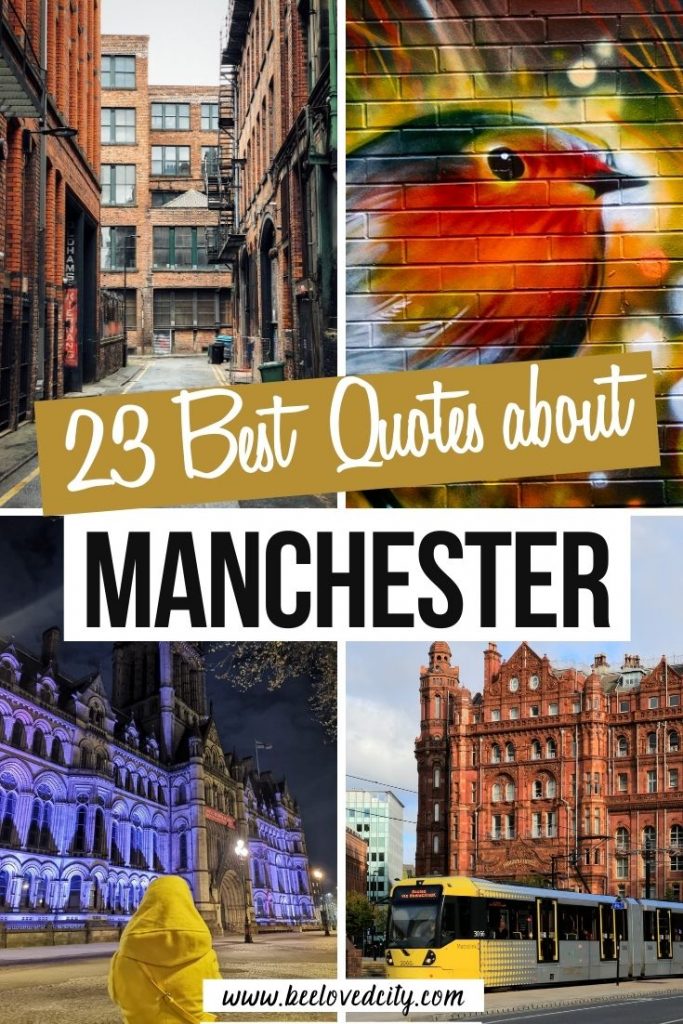 “This is Manchester, we do things differently here”. – Tony Wilson

“Manchester….the belly and guts of the Nation” – George Orwell

“This is Manchester, we do things differently here.” – Tony Wilson

“They return the love around here, don’t they?” -Guy Garvey

“And on the sixth day, god created Manchester “- Leo Stanley

“A city that thinks a table is for dancing on.” – Mark Radcliffe

“What Manchester does today, the world does tomorrow” – Roy Walters

“Manchester changed the world’s politics: from vegetarianism to feminism to trade unionism to communism, every upstart notion that ever got ideas above its station, every snotty street-fighter of a radical philosophy, was fostered brawling in Manchester’s streets, mills, pubs, churches and debating halls.” – Stuart Maconie

“Manchester is a city which has witnessed a great many stirring episodes, especially of a political character. Generally speaking, its citizens have been liberal in their sentiments, defenders of free speech and liberty of opinion – Emmeline Pankhurst

“For Manchester is the place where people do things…. ‘Don’t talk about what you are going to do, do it.’ That is the Manchester habit. And in the past through the manifestation of this quality the word Manchester became a synonym for energy and freedom and the right to do and to think without shackles.” – Judge Parry

“I feel close to the rebelliousness and vigour of the youth here. Perhaps time will separate us, but nobody can deny that here, behind the windows of Manchester, there is an insane love of football, of celebration and of music.” – Eric Cantona

“On derby day in Manchester, the city is cut in two. The Blues and the Reds invade the streets, and if your team wins the city belongs to you. – Eric Cantona

“Manchester is in the south of the north of England. Its spirit has a contrariness in it — a south and north bound up together — at once untamed and unmetropolitan; at the same time, connected and wordly.”
― Jeanette Winterson

“Manchester is in the south of the north of England. Its spirit has a contrariness in it — a south and north bound up together — at once untamed and unmetropolitan; at the same time, connected and wordly.” – Jeanette Winterson, Why Be Happy When You Could Be Normal?

“Manchester United have always stood up again and bounced back; it’s just in the DNA.” – Ole Gunnar Solskjaer

“Manchester’s history is cotton and wool. Birmingham’s is iron and steel.” – Steven Knight

“I love Manchester. Everyone knows that – I have said it many times. Manchester is in my heart.” – Cristiano Ronaldo

“I enjoy every day in Manchester. I am confident we can make a step forward to make people proud of us.” – Pep Guardiola

“When you are in a club like Manchester United, you have a lot of pressure around you.” – Juan Mata

“It is one of the best clubs in the world by far. I’m loving Manchester City.” – Pep Guardiola