France is a paradise for foodies. No matter where you go, you will always find delicious things to eat!

France is proud of its well-deserved reputation when it comes to cuisine. The French know how to cook and make yummy dishes better than anyone. For this reason, food became one of the most important aspects of French culture.

Eating in France is a process and there is a lot to know about it.

In this ultimate France Food Guide, we tell you everything about the best French dishes, what people eat in France, when and how! 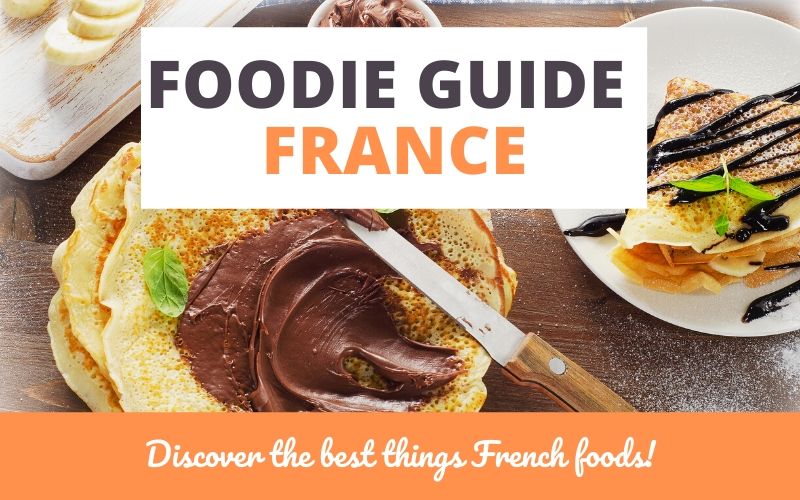 What do people eat in France?

French people eat a variety of things. Unlike what you may think, France is a big country in Europe and there are a lot of regions. Moreover, France also has dozens of oversea regions (in every single continent).

For this reason, French food is extremely varied.

Firstly, let’s talk about the meals (spoiler alert: there are more than 3 in France!), meal times and what they include.

French people love their breakfast and if you are visiting soon, it may very well be your favourite meal as well!

This is usually eaten on weekends and during holidays. As you may imagine, it takes quite a bit of time to eat this breakfast and most French people don’t take the time to do so before going to work. On workdays, most people will opt for a drink (coffee or fruit juice) and cereals, yoghurt or a quick “tartine”.

Baguettes and viennoiseries can be bought in any bakery (“boulangerie”). Ideally, you need to buy them on the same morning so they are fresh.

Starting from 12PM, French people start going for lunch. Anytime between 12PM and 2PM is considered as a “normal” lunch time but most people choose to eat between 12:30 and 13:30.

When they are in a rush, the French will opt for a sandwich. In France, sandwiches are made with baguettes. The most famous one is the “Jambon Beurre”. It’s a half baguette with butter and ham. No matter what, the French like to keep it simple. There shouldn’t be more than 2 or 3 ingredients inside the sandwich.

It’s also important to know that sandwiches are seen as junk food in France so people try to avoid them. In the UK, it’s normal for people to eat a sandwich every day for lunch. In France, it’s not. All workplace provide a microwave so workers can take a Tupperware and re-heat their meal.

This one is probably the most french meal of all. At 4PM, people eat a little snack. This is known as the “goûter” and can sometimes be referred to as “Le 4 heures” which literally means “the 4PM”.

This meal is typically for children. Once they leave school, they get their snack which then will make them wait until dinner.

A goûter is a biscuit, cake or fruit.

Every single french child gets it, every day! Adults don’t eat it as much but it’s still very common for grown-ups to do so as well.

The Apéritif (also called Apéro) is not exactly a meal but more of a gathering with friends for drinks. After work (and before dinner), people meet up with friends or stop by their house for an apéro. This usually includes:

Obviously, the French don’t do that every day but it is a very popular concept. It happens at least once a week. Also, when they invite friends for a meal, they will always ask them to come a couple of hours early for the Apéro.

Please note that the word “Apéritif” also refers to this specific category of drinks. If you go to a restaurant in the evening, the waiter may ask you if you’d like an “Apéritif”. In this case, he would be referring to sweet drinks or spirit we usually drink before dinner.

French people usually eat dinner between 7PM and 9PM. It really depends on the household and their habits. People with kids tend to eat between 7PM and 8PM. Younger people often eat later, between 8PM and 9PM.

No matter what, NOBODY eats before 7PM. It may be normal in Northern Europe to eat dinner at 5 or 6 PM, this is not the case in France. As a matter of fact, you will never find any restaurant that will serve you at this time. They start serving at 7PM until 10/11PM.

The French love duck! Especially in South West France. They cook it in many ways but the favourite is the duck confit (“Confit de canard”). The pieces of duck are kept in a jar, in its own grease and then cooked in the oven. The grease makes the meat extremely soft and tasty. It will literally melt on your tongue. An absolute delight to eat with salad or fries! 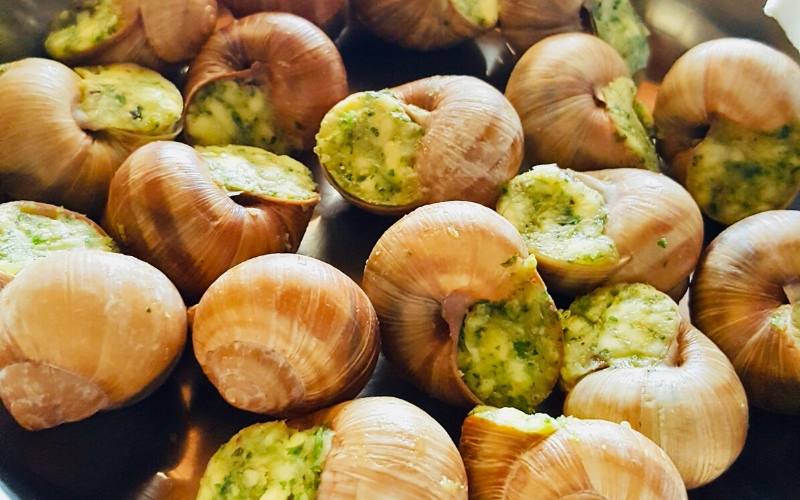 Yes, the French do eat snails! But so does their Spanish and North African neighbours. Yet the French make them in a very unique way, which is why it is so good!

After being cleaned and prepared, the snail is placed back in its shell with a garlic and parsley butter. A few minutes in the oven and it’s all it takes to be ready.

The butter stuffing is delicious which makes this little dish absolutely delicious.

That having been said, don’t think the French eat snails every day! It’s a dish kept for special occasions such as family dinners or Christmas.

Who says France says cheese (and wine, but we will get to that later!). The French love their cheese and eat them at every meal between the main and dessert. Each region of France has its own typical cheeses. Generally, this comes from local productions. For example, in the Pyrenees, you will find a lot of Ewe milk cheese and in Auvergne, a lot of cow milk cheese.

But they don’t only eat them in their natural shape, you can find plenty of dishes based on cheese. 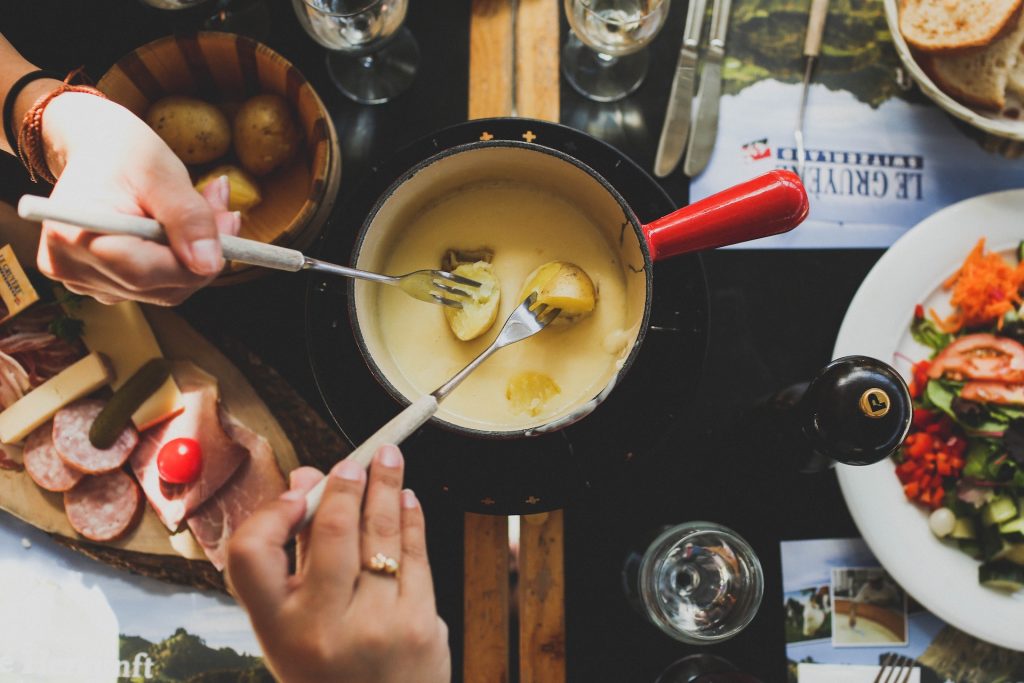 The Fondue is a swiss and French dish. The cheese used to make fondue is only produced in the Alps, hence the two countries sharing the origin of the dish.

They are both delicious! Not too good if you are on a diet though.

It’s a very sociable meal as you all share the same pot! 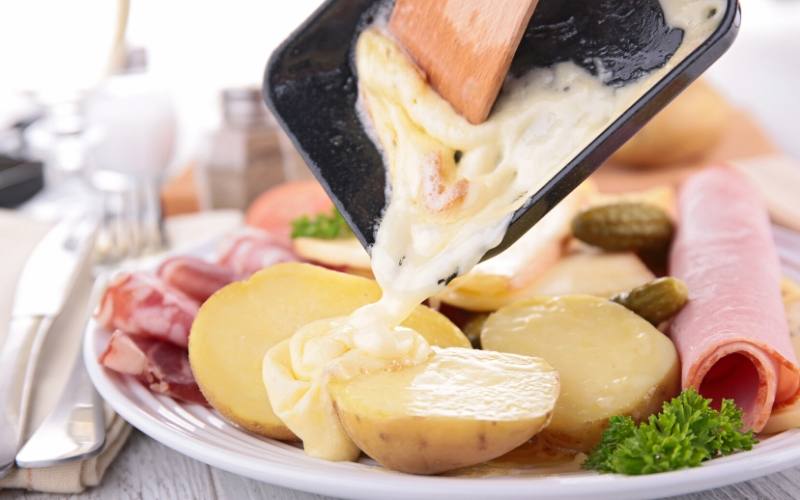 A bit like the Fondue, the Raclette is both French and swiss. The Raclette cheese is only made in the Alps.

The principle is simple. The cheese is placed in the middle of the table, on or in a machine that melts it. Meanwhile, you put diverse things on your plate such as salami, ham, saucisson, boiled potatoes, beef, mushrooms… and once your piece of cheese has melted, you tip it over your food.

A bit like the fondue, it’s a very sociable meal and the French’s favourite Dinner party in winter. 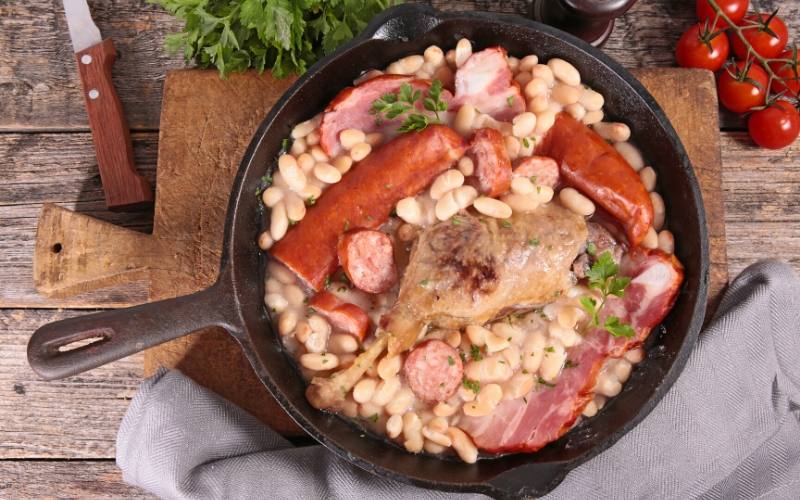 The Cassoulet is a speciality from south west France made with meat (Toulouse sausage or duck) and beans, slow-cooked as a casserole.

This delicious dish is the soul of the South West cuisine and is a must-try if you go to Toulouse or Carcassonne.

The Truffade is a typical dish made in Auvergne with cheese (young Cantal) and potatoes.

You will generally find it with either sausages or ham.

Aligot originates from a neighbour region, the Aveyron. It uses the same ingredients as the Truffade but not cooked the same way. In this case, it’s made with mash potatoes.

You will generally find it with sausage. 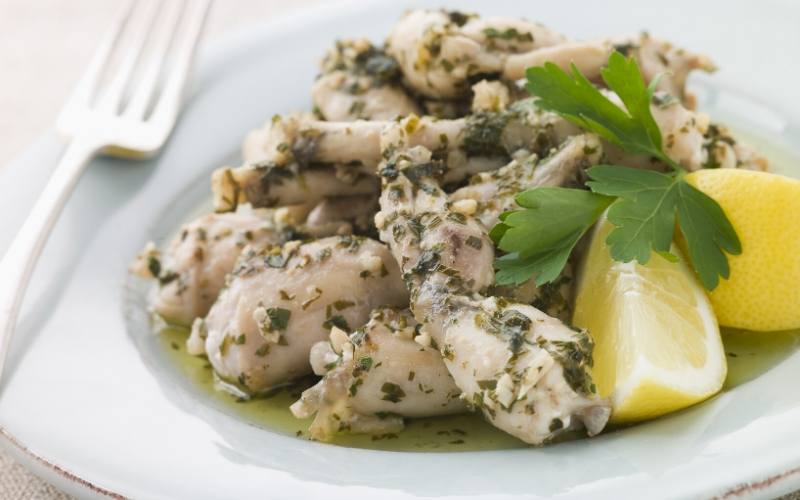 Yes, this is not a myth either. The French do eat frogs. There are different ways to cook them and it would be hard to describe the main way. It’s not common to find them in restaurants but is not impossible. 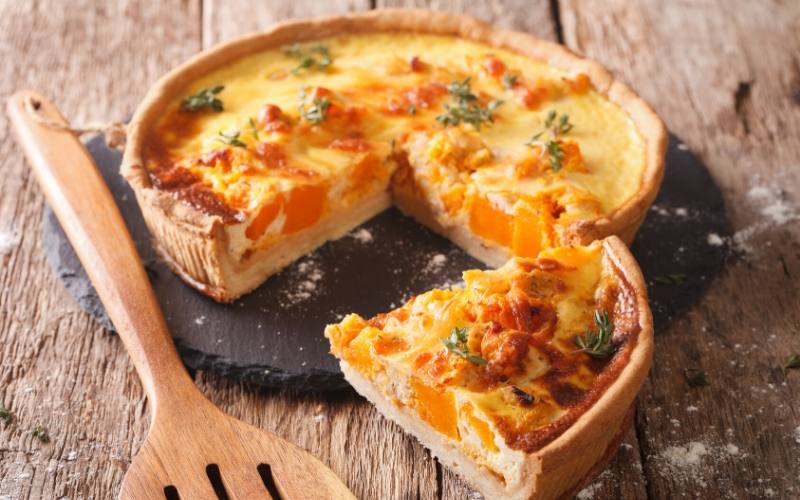 Quiches are a very common starter for a French meal. The traditional quiche, the quiche Lorraine, is made with lardons and cheese but each family has its own little variations of it. Here are some of the most common: salmon quiche, onion quiche, leek quiche… 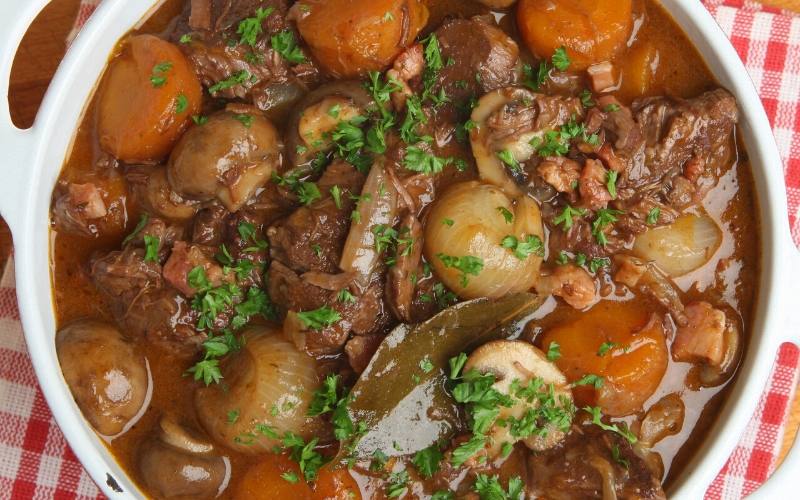 This beef stew is cooked in red wine and is one of France’s favourite dish. It’s slowly cooked for 4 hours and is generally eaten with either pasta or potatoes. 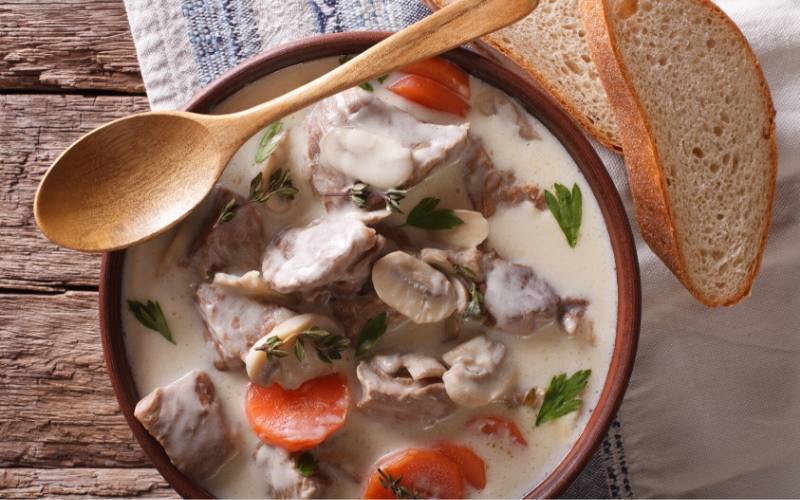 A bit like the beef bourguignon, the Blanquette de veau is a stew made with white wine and veal. This absolutely delicious French dish is a must try during any trip to France!

We hope you enjoy these 12 French foods and will eat the best things in France!

Quick facts and things to know about France and French Food

Here are a few things that you need to know about France and the French. This will help you understand better the food etiquette and why things are how they are.

Should you tip in France?

All workers in France get at the very least minimum wage. Minimum wage is supposed to be enough for anyone to live. Although this is debatable, that does mean that people don’t rely on your tips to live. In the USA, you are very much expected to tip. It would be considered rude not to do so.

This is not the case in France. Most people do not tip. It is simply not our culture to tip. That being said, it doesn’t mean that we never do it!

French people tip when they get outstanding service. This could be that the food was delicious but usually, it’s because the waiter was amazing. When the server is very nice to you and really goes above and beyond everything to make your experience better, you should tip. In this case, 10% of the bill would be a good amount.

Please note that due to the number of international visitors in Paris, waiters in the capital are used to get tipped more than anywhere else in France. For this reason, you may feel more incline to tip in Paris.

Best books about France and the French

Things to do in Toulouse

Things to do in Paris, France 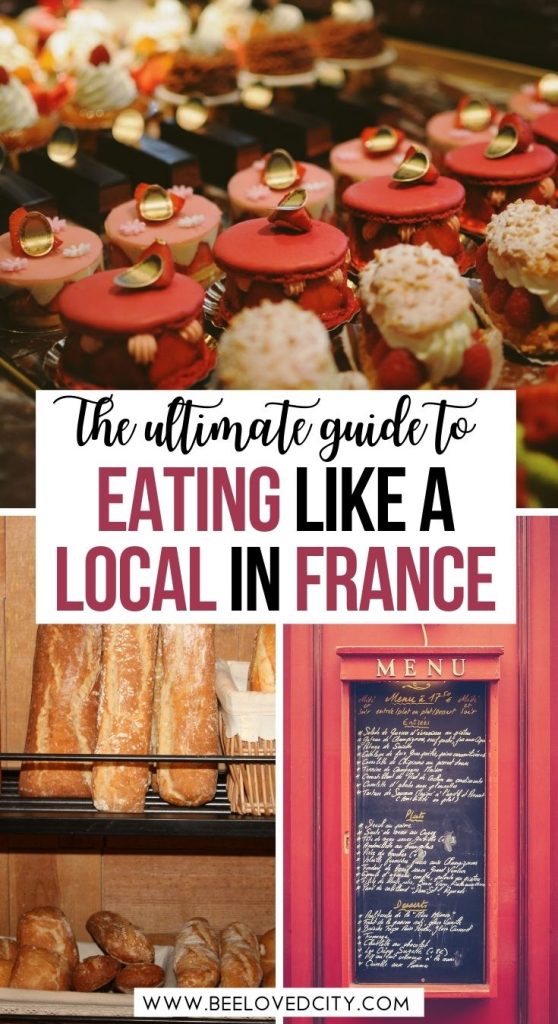