Books about France and the French

As a french person, I obviously know my classics. Very often because I was forced to read them at school 😉 But also because they are not called classics for nothing. Some of them are true masterpieces. They are world famous and definitely something you should read before going to France.

But that’s not all! I also love reading books written by foreign authors about France. I find it particularly interesting to see what other nationalities think of my country. It’s kind of funny to see how they can spot something that has always been normal to me. I find these books absolutely hilarious while being very smart as well.

Finally, I’ve added some more modern french books. Books that are not as famous as the others but are written by up and coming french authors.

Some of these books are set in Paris but others will give you deeper insight into the French culture as a whole.

Top books about France and the French written by foreign authors

A Year in the Merde – Stephen Clarke

A year in the merde is a comical novel written by Stephen Clarke. It’s one of my favourite books in the world!

It’s about this english lad, Paul West, who moves to Paris and starts working for a french company. He stays in Paris for a year and discovers everything about France, the French and french culture. It’s absolutely hilarious. Although this is not an autobiography, Stephen Clarke managed to put together an amazing storyline with funny twists and punchy taglines.

It’s the first book I read in English and is ideal for non-native english speakers and anyone that wants to learn more about France.

I also loved the story behind this book. The beginning was tough for Stephen Clarke. Nobody wanted to publish his book and he had to self-publish. But yet, the public was able to see what professionals weren’t and it became a bestseller!

A year in the Merde is available here.

The adventures of Paul West didn’t stop with the first book! After the success of A year in the Merde, Stephen Clarke wrote another series of books with the same character. This time, Paul goes to South of France with his girlfriend.

It’s as funny as the first one although very different. I highly recommend it!

My life in France is a beautiful autobiography written by the american author Julia Child. She describes in this book the things she loved the most in life: her husband, France and “the many pleasures of cooking and eating”.

This best seller book is a must read if you want to discover more about France with the eyes of an american!

My life in France is available here.

If you look at the back of the book, here is the summary you will see:

-Smoke, drink and eat more fat than anyone in the world, yet live longer and have fewer heart problems than Americans

-Work 35-hour weeks, and take seven weeks of paid holidays per year, but are still the world’s fourth-biggest economic power

So what makes the French so different?

That alone should make you want to read it! I loved that book and when I bought it, this paragraph only convinced me to do so.  For me, being French, working 35-hour weeks and having 30 days holidays are normal things. But when I moved abroad, I realised that they were not normal for everyone. I loved the way this book spots all these french habits and can explain them in an unusually entertaining academic way.

This book is available here.

When in French: Love in a second Language – Lauren Collins

Loving someone in another language is challenging and it’s something that nobody can understand unless they’ve been in this situation.

Communicating with your partner, telling him love words and how you feel is not easy. So imagine what it can be like when on top of that you don’t know how to say these things in a foreign language.

It can be hard at times. But it can also be one of the most amazing things ever.

I know these feelings better than anyone and that’s why I absolutely loved this book by Lauren Collins.

She beautifully explains how she moved to London and fell in love with a french man. Everything about the most beautiful parts of being abroad and in love with someone that doesn’t speak your language.

Although it’s set in London, I find it to be a very interesting book to read if you are interested in the french culture.

When in French is available here.

Time Was Soft There – Jeremy Mercer

Time was soft there is a memoir written by Jeremy Mercer about his life in Paris.

Jeremy Mercer wonderfully writes about his great journey through his sojourn at Shakespeare and Co. and his time with George Whitman.

If you love books, bookshops and Paris, you will fall completely in love with Jeremy’s story!

This book is the perfect read if you are planning on going to Paris and walk through the Latin Quarter!

You can buy Time Was Soft there here.

This book is perfect for anyone wanting to move to France or particularly interested in the French culture. Polly Platt tells you everything you need to know about Getting the Most Out of Visiting, Living and Working in France.

If you want to be able to understand the French and their culture, this is probably the best book you can get. The author’s style is remarkable. She is brilliant at observing aspects of the French culture and putting it together in a humorist way that will be both educating and entertaining.

She takes a bit the same way that Sixty Million French people can’t be wrong, but in a funnier way.

French or Foe is available here.

“Les Liaisons dangereuses” are the most famous French book in the world. Written just a few years before the French Revolution, it will give you a good idea of what the French Aricrostacy was like before the revolution.

It’s an absolute masterpiece that all history lovers should read.

That said, if you are looking for an easy read, this won’t be a good choice. It’s very interesting but you do need to get into it. These books were adapted as a movie as well.

You can buy the Dangerous Liaisons here.

Written by the world famous french poet, Victor Hugo, Les Miserables are a masterpiece of the French literature. First published in 1862, it is considered one of the greatest novels of the 19th century. It’s been adapted as a musical. If you go to London one day, you can watch it in West End London. As a matter of fact, Les Miserables are the longest running musical in London.

If you are heading to Paris, you might also want to check out another famous Victor Hugo novel: the Hunchback of Notre Dame.

As previously mentioned for Dangerous Liaisons, Les Miserables are not an easy book to read. Be aware of that before you start it. But I couldn’t speak about books about France without mentioning it!

You can buy Les Miserables here.

Out of sorts – Aurelie Valognes

Out of sorts is a short novel about this old grumpy french man, Ferdinand, that starts warming up to the others when this family and cheeky little girl move in the building.

The story itself is not much about the french themselves but this book became a bestseller in France.

It was written by Aurelie Valognes, a french author born in Paris that spent a lot of time working with american companies and people. This book was beautifully written in french, using loads of idioms. It’s a very pleasant and easy book to read which is why I added it here. It will also give you an idea of what modern french literature is like!

You can find Out of Sorts here.

Will you ever change? – Aurelie Valognes

If you give a go to Out of Sorts and like it, then you should definitely try Will you ever change?

This funny and quirky novel will make you love french books!

You can buy it here.

I hope these books about France and the French will help you understand better the French Culture. Why we act the way we do, what’s important to us and how to make the best of your travels to France!

Things to do in Paris, France

Things to do in Toulouse

Pin it for later 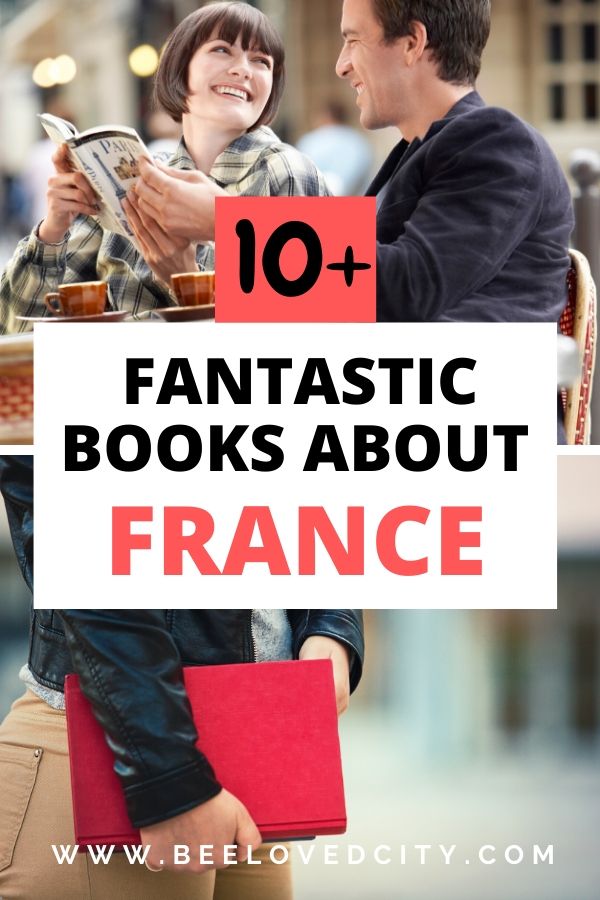