The world premiere of Back to the Future the musical was in Manchester, England on the 20th of February 2020.

It took place at the Opera House, in Spinningfields. It’s the second main theatre in Manchester.

Although I must acknowledge that I ended up going to see it a bit randomly, I must say that was such a good decision!

I got tickets with my ATG member card for £15 (pretty good seats). At that price, who can say no?

Back to the future is a legend, we all love it. So it wasn’t much of a risk anyway.

The thing I wasn’t expecting though is that it would completely blow my mind.

Back to the Future itself can’t really disappoint. However, it was fair to wonder how they would present the time travel to us. Theatre mixing with special effects is a tricky business and can be a hit or miss.

So, let’s drill down to it! The team behind Back to the Future Musical

First of all, it’s important to note that the production brought along some big industry names to put together that wonderful musical.

Here is the award-winning team behind Back to the Future Musical: 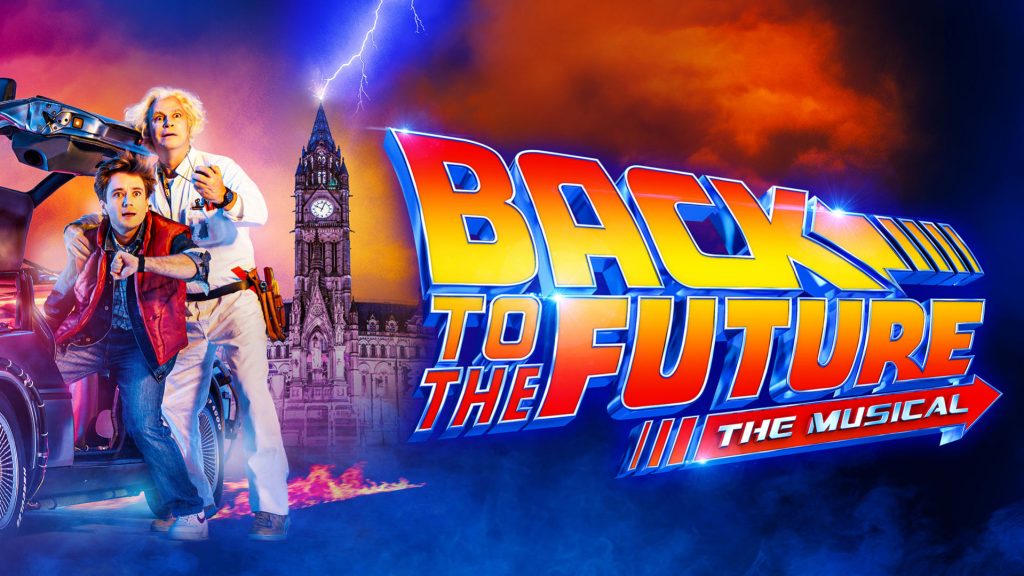 Now let’s talk about the actors because clearly the cast could not have been better!

Marty McFly is played by Olly Dobson. He brings a beautiful harmony to the show and links everything together with humour and kindness. Rosana Hyland, as Lorraine Baynes, is also very good at that. Bringing that pinch of subtle funniness to the show.

But in my opinion, the best actors in this show are the one that plays Doc Brown and George McFly.

George McFly is beautifully played by Hugh Coles. Clumsiness, shiness, awkward moves… we have them all!

Doc Brown makes a triumphal entrance into the show after about 15 minutes. The car literally shoots onto the stage, coming from nowhere! He is in the car, the door opens and … BOOM! Roger Bart it is! Oh yeah! The audience definitely wakes up at that stage!

As much as I loved him as an actor, I never knew he could be that much of a good singer! He was living the role! Voices, moves, facial expression, songs… the show would not be the same without him! He lifted up to everyone’s high expectations for the role of Doc Brown!

All the actors in the show are absolutely brilliant. They play well, are amazing singers and dancers. Another special mention for Courtney Mae-Briggs (aka Jennifer Parker) that has the voice of an angel.

One of the biggest challenges with Back to the Future was to make the set interactive enough to create the illusion of movement and time travel. That doubled up with special effects of course.

In that regard, Back to the Future Musical, blew my mind! It was just so well done. A perfect coordination on every level. The way the stage moves and turns. The way special effects were added from the sides of the stage and on it (with the see-through screen). Everything was just flowing. Going from one scene to another, time travel, Doc climbing up to the clock… Everything about it seems so realistic. You feel like you’ve been thrown into the scene as well.

As much as I’d love to tell you more about it, I don’t want to spoil the fun for you with a spoiler Back To the Future Musical Review! So I shall stop here with that 😉

Fin Ross worked on Harry Potter and the Cursed Child before Back to the Future. If you’ve seen that amazing play in London, it will give you a good idea of how good it can be!

Long story short, a live (and better) version of the best Imax you’ve ever seen!

When it comes to musicals, I love looking at the costumes! If some people don’t care much about them, I think they make the show! They are that little thing that makes it extra special and realistic. This is why I need to make sure there is an amazing note about them in my Back to the Future Musical Review!

The costumes were amazing! So perfect! For everyone!

You get the best of the 80s, 50s and futuristic fashion. The girls wear extremely pretty vintage dresses. George rocks it with his suit at the ball. Doc is as eccentric as ever in the way he dresses. And of course, we get the classic orange “safety jacket” with Marty.

The costumes are part of the story. We know them from the movie and throw us back to 1985. But they were also adapted to fit with this modern production and that was beautifully done!

I really loved the choreography in Back to the Future musical. I’m not too sure how to describe them to make them justice so I’ll keep it short. They were spot-on!

The moves were good and pretty. They were such an important part of the show as each scene would take all its dimension thanks to the dancing. They added these dramatic, funny and lovely effects to the show.

It’s important to note that the dancers were also very good. Very much in sync. And clearly that’s what makes it amazing.

Of course, there were a few quirks here and there. A hat that fell… This kind of thing. But that didn’t matter! It’s a live performance, quirks happen! And that’s why we love theatre too. Because it’s beautifully imperfect.

What did I think about Back to the Future Musical?

There is only one word that comes to mind when I think of Back to the Future Musical: FUN!

It was very good fun! Such a nice thing to watch!

Time literally flies in that theatre!

It was beautifully orchestrated, beautiful to watch in every kind of way, cute, funny and entertaining!

So yeah, if you have an evening to spare, I’d definitely recommend you to go see Back to the Future Musical at the Opera House in Manchester.

Where to buy tickets

I’d love to hear your opinion about Back to the Future Musical so drop a comment!